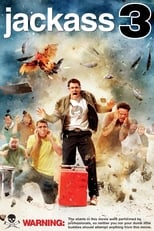 Release: Oct. 15th, 2010
Runtime: 1 hour, 34 minutes
Jackass 3D is a 3-D film and the third movie of the Jackass series. It follows the same premise as the first two movies, as well as the TV series. It is a compilation of various pranks, stunts and skits. Before the movie begins, a brief introduction is made by Beavis and Butt-head explaining the 3D technology behind the movie. The intro features the cast lining up and then being attacked by various objects in slow-motion. The movie marks the...

We didn't find any linked discussions for this film. Here are the results of a quick search of possibly related threads:
24 Jackass
just saw my first episode of jackass i thought it was pretty dumb...is it really liked in the US??...is the movie funny at all??...
8 Jackass 2
Click here for the trailer. ...
4 Jackass 3-D
SONG TOURNAMENT DATABASE RAULDC14 Steppenwolf - Magic Carpet Ride Eagles - Hotel California Judas Priest - You Got Another Thing Comin Metallica - One Rush - ...
6 Jackass 3
Yeah, I actually rented this a few days ago. I couldn't bear to watch all of it; there was some admitted fast-forwarding at times. Still, I knew there'd be two or three bits that would "get"...
62 Jackass: The Movie
Yes, you saw right, they are releasing a Jackass movie this summer with Johnny Knoxville starring. MTV is hoping Knoxville can accomplish what Green couldn't....

Sexy Celebrity Maybe it's just me, but I don't always find the stupid daredevil stunts that the boys do all that exciting ... They are starting to feel like 10 years ago..
READ REVIEW

Yoda Each segment seems to fall into one of three categories: pure stunts (driving things off of ramps, aggravating large animals), gross-outs (drinking someone else's sweat, sitting inside a Porta-Potty while it's launched into the air), and public skits (Head Jackass Johnny Knoxville being made up to l....
READ REVIEW