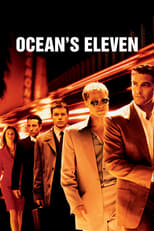 Release: Dec. 7th, 2001
Runtime: 1 hour, 56 minutes
Less than 24 hours into his parole, charismatic thief Danny Ocean is already rolling out his next plan: In one night, Danny's hand-picked crew of specialists will attempt to steal more than $150 million from three Las Vegas casinos. But to score the cash, Danny risks his chances of reconciling with ex-wife, Tess.

We didn't find any linked discussions for this film. Here are the results of a quick search of possibly related threads:
35 Ocean's Eleven, or Harry Potter?
Ok, Harry Potter looks to remain in first place at the Box Office for the next two weekends (that's three at the top overall, to start it's release). After that, however, on it's fourth weekend of rel...
4 Ocean's Eleven Domestic Gross
How much will "Ocean's Eleven" finish with in terms of U.S. domestic gross? In case you don't know yet, it pulled in just under $40 million in it's opening weekend, according to mid-Sunday e...
2 Station Eleven series adaptation
"Patrick Somerville, the showrunner for Netflix’s “Maniac,” is set to serve in the same capacity for two shows for the upcoming WarnerMedia streaming service, one of them a post apocalyptic th...
0 Film Fight Club: Round Eleven
Previous Rounds Round 10: Tombstone (12) VS Wyatt Earp (3) Round 9: Friends with Benefits (4) VS No Strings Attached (0) Round 8: The Prestige (15) VS The Illusionist (6) Round 7: The Thin Red L...

Yoda "Ocean's Eleven" is not a particularly funny movie on paper, but when put in the hands of an overqualified director, and an experienced cast with a penchant for fine comedic timing, it becomes an absolute riot.
READ REVIEW