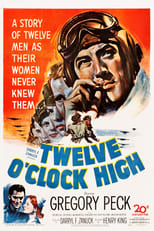 Release: Dec. 21st, 1949
Runtime: 2 hours, 12 minutes
In this story of the early days of daylight bombing raids over Germany, General Frank Savage must take command of a "hard luck" bomber group. Much of the story deals with his struggle to whip his group into a disciplined fighting unit in spite of heavy losses, and withering attacks by German fighters over their targets.

We didn't find any linked discussions for this film. Here are the results of a quick search of possibly related threads:
2 Clock
I live in CST. It is 9:26 right now. In my profile, I selected -1 from EST. How come the time for this one shows up as 10:26?...
38 clock trouble
Has the site's internal clock been about twelve minutes fast for everybody lately, or is it just me?...
32 Ocean's Twelve
from IMDB: "Ocean's Twelve" involves Danny Ocean (George Clooney) and his gang of hustlers from the first film (Brad Pitt, Don Cheadle, Matt Damon, Carl Reiner) heading off to England to ...
1 Have a twelve year old talk to you like that
There was a show or movie when they discussing a rude kid and after words the guy responds in a funny way “ I know it’s so demeaning when a 12 year old talks to you like that “””” In like a funny w...
4 The House With a Clock In Its Walls
Wow, they're making movies out of John Bellairs books! I got into these growing up. I found a third-hand copy of The Secret of the Underground Room in a largely abandoned building, on the floor, wh...

mark f It's definitely not a gung-ho war film; in fact, it's a very potent anti-war film, but it's one of those films which makes the case that some wars are necessary and have to be won, no matter what the cost.
READ REVIEW