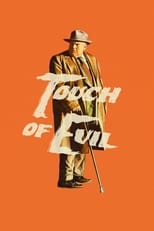 Release: Mar. 30th, 1958
Runtime: 1 hour, 35 minutes
When a car bomb explodes on the American side of the U.S./Mexico border, Mexican drug enforcement agent Miguel Vargas begins his investigation, along with American police captain Hank Quinlan. When Vargas begins to suspect that Quinlan and his shady partner, Menzies, are planting evidence to frame an innocent man, his investigations into their possible corruption quickly put himself and his new bride, Susie, in jeopardy.

4 I didn't understand part of the plot to Touch of Evil (1958)
View Spoilers WARNING: "SPOILER" spoilers below I feel it was really far fetched how the villain, Quinlan, was able to frame Vargas's wife for murder. All he did was have the wom...

SmudgeEFC1985 I read after watching this that it was cut and edited by the studio without director Orson Welles' input, and I think you can definitely tell.
READ REVIEW

Thief The film has undeniable technical merits and an inherently thrilling nature, in addition to great performances...
READ REVIEW