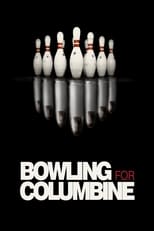 Release: Oct. 9th, 2002
Runtime: 2 hours
This is not a film about gun control. It is a film about the fearful heart and soul of the United States, and the 280 million Americans lucky enough to have the right to a constitutionally protected Uzi. From a look at the Columbine High School security camera tapes to the home of Oscar-winning NRA President Charlton Heston, from a young man who makes homemade napalm with The Anarchist's Cookbook to the murder of a six-year-old girl by another...

We didn't find any linked discussions for this film. Here are the results of a quick search of possibly related threads:
13 Bowling for Columbine
HAs anyone seen the movie? I saw it and was alternately disgusted and amused by the movie. Michael Moore abuses his pulpit by presenting half-facts and spins on the truth to make his argument seem ...
7 Bowling for Columbine DVD...Cancelled?
According to a video retailers magazine I got at my shop today, the DVD (and VHS) of Bowling for Columbine (In the U.S., anyway) has been "Put on hold, indefinitely." A possible backlash fr...
263 A Bowling for Columbine Review
Michael Moore's film Bowling for Columbine is an extremely powerful editorial on the culture of fear and violence we as Americans live in. I literally had to laugh at some of this to keep from crying...
31 bowling for columbine...confliction anyone???
well well well, I sat and I watched it...in my house not in the theaters...and holy molly.....never as a canadian have I felt so much sympathy....mixed with anger mixed with unity mixed with ...
0 Song from Bowling for Columbine
Does anybody know the name and artist of the song that they play in bowling for columbine while they're showing the footage of the school cameras during the massacre? It's a guitar acoustic and I'd l...