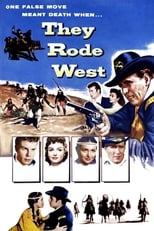 Release: Dec. 4th, 1954
Runtime: 1 hour, 24 minutes
Dr. Allen Seward (Robert Francis) is assigned to a western cavalry post where his predecessors had been drunks and slackers. The post doesn't take kindly to him either, especially after he disregards regulations and tends to sick Indians on the malaria-infested reservation. The Indians break away from the reservation to move to a healthier higher ground, and when they join with the Comanches to besiege the fort, Seward is branded as a...