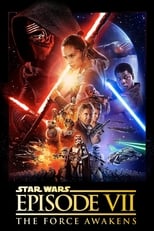 Release: Dec. 15th, 2015
Runtime: 2 hours, 16 minutes
Thirty years after defeating the Galactic Empire, Han Solo and his allies face a new threat from the evil Kylo Ren and his army of Stormtroopers.

We didn't find any linked discussions for this film. Here are the results of a quick search of possibly related threads:
945 Star Wars: The Force Awakens
Release Date: December 18, 2015 (3D/2D theaters) Studio: Walt Disney Pictures, Lucasfilm Director: J.J. Abrams Screenwriter: J.J. Abrams, Lawrence Kasdan Starring: Harrison Ford, Carrie Fish...
233 Star Wars: The Force Awakens
Well, the Force awoke, stumbled around blindly in the dark, muttering something about star wars, stubbed its toes on some toys, and went back to bed. Then I yawned. I am a huge Star Wars fan. I ...
0 Star Worlds Episode XXXIVE=MC2: The Force Awakens the Last Jedi...
Who Went Rogue I'm not making this up! This is going to be the next spoof film from the duo of Jason Friedberg and Aaron Seltzer, the guys behind Epic Movie, Superhero Movie, Meet the Spartans, and V...
7 Question about Star Wars: The Force Awakens
Ok so Star Wars isn't really my thing especially after the hugely crapfest that was Phantom Menace and the other two (not worth mentioning there names) horrible movies. I know this is really sad but ...
10 'Star Wars: The Force Awakens' Might Be an Oscar Contender
It's been noted that The Force Awakens just might be up for an Oscar nomination. There are people who say that it doesn't deserve one, but at least the special effects and such could be considered. If...

seanc The way that I reacted to this film emotionally and the way that my crowd reacted audibly are proof that fans were not ready to say goodbye to the characters and world that Lucas created.
READ REVIEW

Iroquois Being a film that is most definitely guaranteed a sequel above all others, The Force Awakens manages to tease out all manner of plot points with the unspoken promise that they will be resolved in later installments, but that also has the effect of making the film feel fundamentally incomplete beyond....
READ REVIEW

BraedenG33 I know a lot of people found this film to be derivative, too similar to episode 4, or whatever there gripes are and I get that, it's not a perfect film, it certainly wasn't the best film made last year, but it was my favorite for personal reasons.
READ REVIEW
View All (11)

I Derezzed You
10th