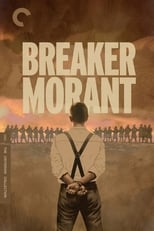 Release: May 15th, 1980
Runtime: 1 hour, 47 minutes
During the Boer War, three Australian lieutenants are on trial for shooting Boer prisoners. Though they acted under orders, they are being used as scapegoats by the General Staff, who hopes to distance themselves from the irregular practices of the war. The trial does not progress as smoothly as expected by the General Staff, as the defence puts up a strong fight in the courtroom.

We didn't find any linked discussions for this film. Here are the results of a quick search of possibly related threads:
0 The bank robber & jail breaker inspired by the movies [Rédoine Faďd]
Lots of crazy details in here. Could almost imagine a movie being made out of it... The Secrets of the World's Greatest Jailbreak Artist Midway through the question-and-answer ...

Iroquois Based on actual events, it follows the titular Morant (Edward Woodward), an officer in the Australian army who leads a regiment during the Boer War, a war that broke out in South Africa between the British Empire and the Dutch-origin occupants of the region.
READ REVIEW