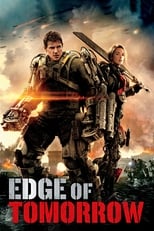 Release: May 27th, 2014
Runtime: 1 hour, 53 minutes
Major Bill Cage is an officer who has never seen a day of combat when he is unceremoniously demoted and dropped into combat. Cage is killed within minutes, managing to take an alpha alien down with him. He awakens back at the beginning of the same day and is forced to fight and die again... and again - as physical contact with the alien has thrown him into a time loop.

We didn't find any linked discussions for this film. Here are the results of a quick search of possibly related threads:
24 Edge of Tomorrow
The most entertaining movie I've seen in a while. I just saw Edge of Tomorrow, so I'm sorry if this review is a little bit late. But, I must say that this was one of the most fun times I've had...
20 Edge of Tomorrow
The first teaser released today, it looks good. ...
4 Edge of Tomorrow sequel in the Works
Hope this happens, especially with Blunt and Cruise returning. Edge of Tomorrow might be my favourite film of the decade, except for maybe Arrival....

Iroquois Tom Cruise's action-hero protagonist at least gets a bit more development than usual because he starts off as a self-absorbed fool who takes a lot of physical and mental punishment thanks to his actions at the start of the film getting him thrown into the fray against his wishes, complete with tough....
READ REVIEW

seanc I don't feel that Edge Of Tomorrow does this until the very end which left me dissatisfied ever so slightly.
READ REVIEW

mrtylerdurden Overall Edge of Tomorrow is a fun, mostly unique story, with quite a few good action scenes.
READ REVIEW
View All (7)