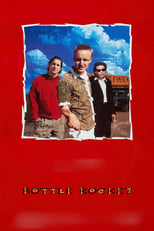 Release: Feb. 21st, 1996
Runtime: 1 hour, 31 minutes
Upon his release from a mental hospital following a nervous breakdown, the directionless Anthony joins his friend Dignan, who seems far less sane than the former. Dignan has hatched a hair-brained scheme for an as-yet-unspecified crime spree that somehow involves his former boss, the (supposedly) legendary Mr. Henry.

0 Rocket Science
I saw this movie a while ago and loved everything about it. It wasn't a huge movie but I think it could have been. It was very quirky and awkward but still all around amazing. Has anyone else seen thi...
7 Bottle Shock
Bottle Shock is an upcoming drama film starring Alan Rickman, Bill Pullman, and Chris Pine. Steve Spurrier travels to the not-yet-so-famous Napa Valley where he creates the Judgment of Paris wine tast...
3 Genie in a bottle gets smashed against a wall
hi there, a scene i remember from a film/cartoon i saw in the 80's ('sinbad' type film so it cud from the 50's onwards) is when a genie was being mean to someone and while his back was turned, another...

Gideon58 Owen Wilson plays Dignan, a career criminal wanna-be who breaks his best friend, Anthony (Luke Wilson) out of a mental hospital the day he is being released and along with their friend, Bob (Robert Musgrave), a nebbish who is bullied by his older brothers, decide to go on an elaborate crime spree, h....
READ REVIEW