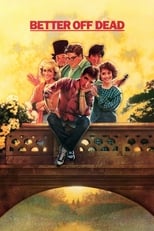 Release: Oct. 11th, 1985
Runtime: 1 hour, 37 minutes
Lane Meyer is obsessed with his girlfriend Beth and is crushed when she falls for the new captain of the ski team, Roy. After several failed suicide attempts, narrow escapes from the relentless paper boy, and nearly unbearable dinners at home with his crazy family, Lane finds a new love in French exchange student Monique Junot. Meanwhile, he must beat Roy on the slopes to regain his honor.

3 Is Valkyrie Dead? Is United Artists Dead ? Is Tom Cruise Dead?
Actually I had not heard anything about this film until I read this in the NY Times: April 23, 2008 The Nazi Plot That’s Haunting Tom Cruise and United Artists By MICHAEL CIEPLY LOS ANGELE...

Gideon58 This brassy comic nightmare stars John Cusack as Lane Holland,a hyper-sensitive high schooler who loves to ski and is madly in love with a girl named Beth (Amanda Wyss), who dumps him as the story opens, but Lane does connect with a foreign exchange student named Monique (Diane Franklin) who lives a....
READ REVIEW