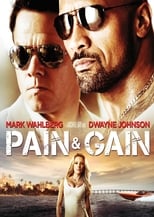 Release: Apr. 18th, 2013
Runtime: 2 hours, 10 minutes
Daniel Lugo, manager of the Sun Gym in 1990s Miami, decides that there is only one way to achieve his version of the American dream: extortion. To achieve his goal, he recruits musclemen Paul and Adrian as accomplices. After several failed attempts, they abduct rich businessman Victor Kershaw and convince him to sign over all his assets to them. But when Kershaw makes it out alive, authorities are reluctant to believe his story.

We didn't find any linked discussions for this film. Here are the results of a quick search of possibly related threads:
6 Pain And Gain
Pain and Gain Michael Bay 2013 Plot Summary A pair of bodybuilders in Florida get caught up in an extortion ring and a kidnapping scheme that goes terribly wrong. ...
20 Most impressive gain of weight?
Which actor has most impressed you with his/her gain of weight? Honourable mentions for me would be ... (well ok they're all i can think of) - Bobby de niro: raging bull (just watch taxi driver b...
0 movie about woman who becomes prostitute and oblivious to physical pain?
please help me find the name of this movie iv been searching for ages. it came out after 2000 i think but it isnt that recent,probably before 2009. its an american movie about this fair redhead women...

The Gunslinger45 It is shot in Miami just like his Bad Boys movies, the movie cant hold a shot for more than a few seconds, pointless female characters who are there to be hot (more on that later), has a final chase sequence that involves cars, boats, AND helicopters; and finally it is the genre where he is at his m....
READ REVIEW

Optimus I find it hard to imagine that the story happened the way the movie portrays it, but it is Michael Bay so you should expect nothing less.
READ REVIEW

Gideon58 Watching these guys get away with everything that they do is all the more aggravating because these guys are idiots and not very likable, though Johnson's character, Paul Doyle, does possess some very engaging qualities and caring about this character is initially very easy; unfortunately, the scree....
READ REVIEW
View All (4)