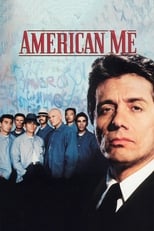 Release: Mar. 13th, 1992
Runtime: 2 hours, 5 minutes
Edward J. Olmos made his directorial bow with the powerhouse crime saga American Me. Olmos stars as street-gang leader Santana, who during his 18 years in Folsom Prison rules over all the drug-and-murder activities behind bars. Upon his release, Santana goes back to his old neighborhood, intending to lead a peaceful, crime-free life. But his old gang buddies force him back into his old habits. The

Thief Exchanges like that are one of many examples in the film where Montoya has to come to terms with his life, his choices.
READ REVIEW