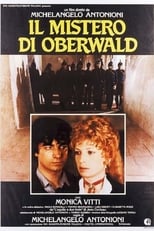 Release: Sep. 3rd, 1981
Runtime: 2 hours, 9 minutes
A hunted man breaks into the castle at Oberwald to kill the Queen, but faints before doing so. He is Sebastian, the splitting image of the King who was assassinated on his wedding day. The Queen discovers that Sebastian once wrote a subversive poem that she liked, even though it was attacking her. The Queen dares Sebastian to kill her, otherwise she vows to kill him.

crumbsroom Making the perverse choice to record Oberwald directly onto video, it doesnt take long for it to become very hard to reconcile what we are watching with anything that has anything whatsoever to do with Antonioni.
READ REVIEW