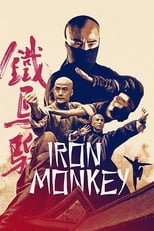 Release: Sep. 3rd, 1993
Runtime: 1 hour, 30 minutes
Iron Monkey is a Hong Kong variation of Robin Hood. Corrupt officials of a Chinese village are robbed by a masked bandit known as "Iron Monkey", named after a benevolent deity. When all else fails, the Governor forces a traveling physician into finding the bandit. The arrival of an evil Shaolin monk, brings the physician and Iron Monkey together to battle the corrupt government.

We didn't find any linked discussions for this film. Here are the results of a quick search of possibly related threads:
27 Iron Monkey
i loved this movie, best kung fu film besides CTHD and The Last Hurrah for Chivalry. It was a really fun movie. I liked it, if u like martial arts movies, go see this one. BTW: next week i will see...

mark f Meanwhile, another doctor (Donnie Yen) comes to the Iron Monkey's town to try to capture him and he's accompanied by his young son (Sze-Man Tsang), but as the Governor's violent tactics increase, the "good guys" band together to fight the Governor's men and a group of Shaolin monks and nuns led by t....
READ REVIEW