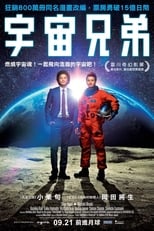 Release: May 5th, 2012
Runtime: 2 hours, 8 minutes
When Mutta was 12-years-old and Hibito was 9-years-old the two brothers saw what they thought was an UFO flying towards the moon. They made a pact then to become astronauts and one day fly into space together. Fast forward to the year 2025. Older brother Mutta (Shun Oguri) works as for an automotive company and his younger brother Hibito works as an astronaut. Although Mutta failed to follow through on his childhood promise, after losing his...