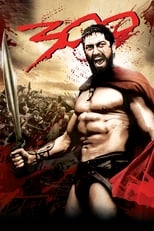 Release: Mar. 7th, 2007
Runtime: 1 hour, 57 minutes
Based on Frank Miller's graphic novel, "300" is very loosely based the 480 B.C. Battle of Thermopylae, where the King of Sparta led his army against the advancing Persians; the battle is said to have inspired all of Greece to band together against the Persians, and helped usher in the world's first democracy.

Optimus Movie Trivia: In the movie, some of the Spartan men can be seen with trimmed beards or no facial hair at all.
READ REVIEW

Masterman 300 is a love it or hate it movie, it's movie that devides opinion with movie fans, which isn't a shock because most of Zack Snyder's work does that.
READ REVIEW

John McClane This is the strongest thing the movie has going for it, and the creators know it.
READ REVIEW
View All (7)