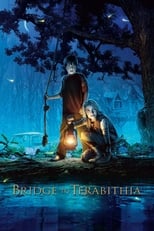 Release: Feb. 16th, 2007
Runtime: 1 hour, 36 minutes
Jesse Aarons trained all summer to become the fastest runner in school, so he's very upset when newcomer Leslie Burke outruns him and everyone else. Despite this and other differences, including that she's rich, he's poor, and she's a city girl, he's a country boy, the two become fast friends. Together, they create Terabithia, a land of monsters, trolls, ogres, and giants and rule as king and queen.

We didn't find any linked discussions for this film. Here are the results of a quick search of possibly related threads:
4 The Bridge
Has anyone been watching The Bridge on FX?...

The Gnat But this film hits with all three kids that lead off the film.
READ REVIEW