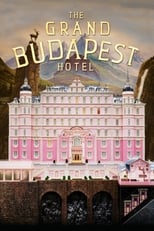 Release: Feb. 26th, 2014
Runtime: 1 hour, 39 minutes
The Grand Budapest Hotel tells of a legendary concierge at a famous European hotel between the wars and his friendship with a young employee who becomes his trusted protégé. The story involves the theft and recovery of a priceless Renaissance painting, the battle for an enormous family fortune and the slow and then sudden upheavals that transformed Europe during the first half of the 20th century.

Jack1 It's based on Stefan Zweig's writings, but it really feels like a thoroughly original work - I certainly can't think of another film like it, and I'm sure you could say that about most of Anderson's films.
READ REVIEW

Gatsby The plot is your standard Anderson-esque recollection of past events peppered with elements of caper and period films, but even this shows that, as Roger Ebert famously said, "it's not what a film is about, but HOW it is about..
READ REVIEW
View All (7)