Related: The Invasion Of The Body Snatchers Quiz 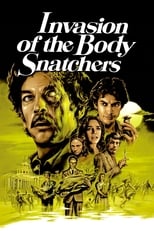 Release: Dec. 19th, 1978
Runtime: 1 hour, 55 minutes
The first remake of the paranoid infiltration classic moves the setting for the invasion, from a small town to the city of San Francisco and starts as Matthew Bennell notices that several of his friends are complaining that their close relatives are in some way different. When questioned later they themselves seem changed, as they deny everything or make lame excuses. As the invaders increase in number they become more open and Bennell, who has...

We didn't find any linked discussions for this film. Here are the results of a quick search of possibly related threads:
3 Invasion of The Body Snatchers remake...again
"The body snatchers are back, with Warner Bros. developing a remake of the sci-fi classic Invasion of the Body Snatchers, The Hollywood Reporter has confirmed. Horror screenwriter David Lesli...
3 Terran invasion
I am a fan of sci-fi movies but , all of the ''space invasion'' movies and documentaries I've seen are , in essence , Earth gets attacked by aliens , and in the end , we win . I watched Avatar and Pla...
15 What home invasion movie?
Hi! I've been looking for this movie. Not a supergood movie, but I need to find it. My memory of it it very vague. Its from north America. Should be from around 2010ish. Plot, i think it was about...
24 Best Home Invasion Movies?
There was a foreign b&w movie and even though they were trespassing, it wasn't the cliched "tie-em-up" or someone escaping with a secret key - I'm looking for realism with a great scr...
4 TV shows about Alien Invasion
Just started watching The Invaders, I knew I was going to enjoy the show, but had no idea it would be so much fun. Even though uptil now we've seen most of the Alien Invasion ideas done to death ...

Citizen Rules The way they do off centered and tilted shots gives a real sense of foreboding...as does the film noir style lighting in some of the darker interior shots.
READ REVIEW

Iroquois There's also the fact that the body-snatchers work their magic while their victims are sleeping, and the prospect of going to sleep and never waking up doesn't sound pleasant; a horror concept based on the idea that you must forgo a mundane yet vital activity like sleeping in order to keep yourself ....
READ REVIEW

SmudgeEFC1985 I'm not a huge fan of remakes, especially horror ones, and having seen the 1950s classic, the not so classic 2007 remake, and homage laden The Faculty, I guess I figured my life didn't need another Body Snatchers incarnation.
READ REVIEW
View All (5)