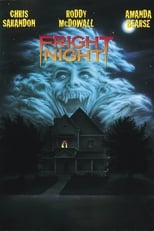 Release: Aug. 2nd, 1985
Runtime: 1 hour, 46 minutes
Nobody believes teenager Charley Brewster when he discovers that his suave new neighbor, Jerry Dandrige, is a vampire. So when the bloodsucker starts stalking Charley, he turns to has-been actor Peter Vincent, famed for portraying a ghoul hunter. Unfortunately for the would-be vampire slayers, Dandrige has set his sights on Charley's girlfriend.

We didn't find any linked discussions for this film. Here are the results of a quick search of possibly related threads:
10 Fright Night (1985) vs. Fright Night (2011)
I watched both and felt the remake was better. The original, I felt had some weaknesses, like the cliche which I have seen so many times in 80s movies, where as the guy wants to sleep with the girl a...
8 Fright Night.
Hi, I just watched the movie Fright night. The 1985 version. And I watched it a couple of times. I am confused as to what the heck the Billy Cole person is supposed to be. I know that he is suppose...
13 Fright Night
Directed by Craig Gillespie Starring Colin Farrell, Anton Yelchin, and Toni Collette This will be the 3-D version of the cult favorite of the same name from 1985. I really don't see how this is goin...
17 Fright Night Remake
Really? Why? Why must they do this?...
1 Songs From the movie Fright Night
Hey can someone please tell me what are the songs name and artists of the songs that they play inthe scence in the club where they dance in fright night. i know that they play 3 songs. 1 when they go ...

MovieMeditation This was my Halloween midnight movie of past year and it was a long overdue film I was determined to watch and what better way or time than Halloween Night.
READ REVIEW

PeterVincent The film centres around a schoolboy named Charlie Brewster, who after peeking through his window at his new neighbour discovers that vampires exist and his neighbour Jerry is one of the creatures of the night.
READ REVIEW

TheUsualSuspect Along with the Lost Boys this vampire romp is something I can watch over and over and is another entry into a long list of vampire films that ar.
READ REVIEW
View All (6)