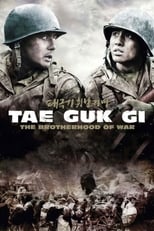 Release: Feb. 5th, 2004
Runtime: 2 hours, 20 minutes
When two brothers are forced to fight in the Korean War, the elder decides to take the riskiest missions if it will help shield the younger from battle.

We didn't find any linked discussions for this film. Here are the results of a quick search of possibly related threads:
1 Brotherhood
I just wanted to know if anybody has seen Brotherhood, the new show on Showtime. Does anybody else think this show is on the road to greatness? I know it's still early but this show could be better ...
10 The Brotherhood of the Wolf
did anyone else see this preview at amelie or muholland drive. It looks really good comes out next friday the 11th. its already out in europe, anyone here from europe or seen it yet?...
5 Brotherhood of the Wolf
anyone see it yet, i want to know if it was good....
6 Le Pacte des Loups (Brotherhood of the Wolves)
Hey everyone, I don’t know about all of you, but when I watch a movie I don’t like to be sitting there wondering what time it is going to end. I need the kind of flick that will keep me on the edg...

akatemple Jin-seok gets drafted the South Korean way by being put into the back of a truck and being told you are going to fight, older brother Jin-tae forces himself into a situation where he will be drafted so he can look after and make sure his younger brother is safe.
READ REVIEW