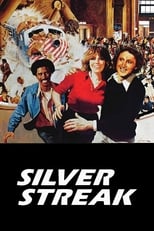 Release: Dec. 3rd, 1976
Runtime: 1 hour, 54 minutes
A somewhat daffy book editor on a rail trip from Los Angeles to Chicago thinks that he sees a murdered man thrown from the train. When he can find no one who will believe him, he starts doing some investigating of his own. But all that accomplishes is to get the killer after him.

mark f Both this film, and its follow-up, Foul Play, which Higgins got to both WRITE AND DIRECT, were big moneymakers and enabled Higgins to direct both Nine to Five and The Best Little Whorehouse in Texas.
READ REVIEW

NO RATING
Gideon58 Silver Streak was Colin Higgins' richly entertaining 1976 comedic adventure that combines comic insanity, a touch of romance and a definite touch of Hitchcockian suspense for the train ride of a lifetime, in addition to introducing a brand new comedy team who would appear in two more movies together.
READ REVIEW