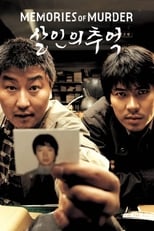 Release: May 2nd, 2003
Runtime: 2 hours, 11 minutes
1986 Gyunggi Province. The body of a young woman is found brutally raped and murdered. Two months later, a series of rapes and murders commences under similar circumstances. And in a country that had never known such crimes, the dark whispers about a serial murderer grow louder. A special task force is set up in the area, with two local detectives Park Doo-Man and Jo Young-Goo joined by a detective from Seoul who requested to be assigned to the case.

Iroquois In addition to the compelling main narrative provided by the detectives constantly trying to close the case by tracing whatever leads they can (especially when the killer's modus operandi involves certain observable events), there are various smaller plots that are brought up and resolved throughout....
READ REVIEW

JayDee The film presents the contrasting fortunes of two of these investigators; local cop Detective Park Doo-man and Detective Seo Tae-Yoon, a young investigator sent from Seoul to assist the department.
READ REVIEW

akatemple I really wanted to like this movie but it was just way to long and drawn out, and the fact that a lot of this film is just botched police work and interogations that go nowhere.
READ REVIEW
View All (6)