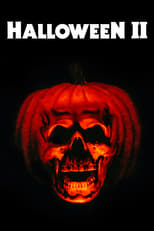 Release: Oct. 30th, 1981
Runtime: 1 hour, 32 minutes
After failing to kill stubborn survivor Laurie and taking a bullet or six from former psychiatrist Dr. Sam Loomis, Michael Myers has followed Laurie to the Haddonfield Memorial Hospital, where she's been admitted for Myers' attempt on her life. The institution proves to be particularly suited to serial killers, however, as Myers cuts, stabs and slashes his way through hospital staff to reach his favorite victim.

We didn't find any linked discussions for this film. Here are the results of a quick search of possibly related threads:
7 Why did Halloween (2018) ignore Halloween II?
I get it's becoming a trend for franchises to make sequels where they ignore all the dirt spots and only acknowledge the ones people fondly remember. I personally like Terminator 3, but I know it does...
13 Halloween (2018) vs. Halloween (2007)
...

Nostromo87 Loomis hunt the streets for Michael Myers, who has found Laurie at the Haddonfield Hospita.
READ REVIEW

Iroquois The film picks up immediately after the end of the first film and sees Laurie taken to hospital to recover from her ordeal, but of course Michael finds out where she's gone and heads to a hospital whose skeleton crew of nurses and paramedics present prime vessels for his particular brand of unpredic....
READ REVIEW

Thief Halloween II picks up right after the original, as Laurie (Jamie Lee Curtis) is taken to the hospital while Dr.
READ REVIEW