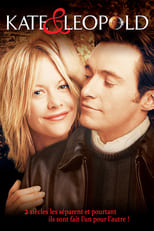 Release: Dec. 25th, 2001
Runtime: 1 hour, 58 minutes
When her scientist ex-boyfriend discovers a portal to travel through time -- and brings back a 19th-century nobleman named Leopold to prove it -- a skeptical Kate reluctantly takes responsibility for showing Leopold the 21st century. The more time Kate spends with Leopold, the harder she falls for him. But if he doesn't return to his own time, his absence will forever alter history.

We didn't find any linked discussions for this film. Here are the results of a quick search of possibly related threads:
11 Kate & Leopold
Kate & Leopold **˝ I’m almost embarrassed to write my opinion on this matter. I searched the forum for a previous thread about Kate & Leopold, not only did I not find a thread about ...
14 Jon and Kate: DIVORCING?
I have always liked the show Jon and Kate plus 8. For those that don't know; John and Kate plus 8 is a reality series on TLC which follows the family through their everyday lives with (aha!) 8 childre...
2 Kate Winslet Period Drama
I watched a movie some years back that was a period drama and stared Kate Winslet. All I can remember about the movie is that she falls in love with a guy (surprise, surprise) and that there is a scen...
7 What happened to Kate Hudson after Almost Famous?
Kate Hudson was fantastic in Almost Famous in 2000, even getting a well deserved Oscar nomination. But what happened after that movie? All she's done since then is mediocre or terrible rom-coms, and s...

LordSlaytan My only conclusion is that this movie didnt warrant any opinions at all, though that confuses me because I found that I really enjoyed it.
READ REVIEW