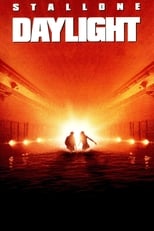 Release: Dec. 6th, 1996
Runtime: 1 hour, 55 minutes
A group of armed robbers fleeing the police head for the New Jersey Tunnel and run right into trucks transporting toxic waste. The spectacular explosion that follows results in both ends of the tunnel collapsing and the handful of people who survived the explosion are now in peril. Kit Latura is the only man with the skill and knowledge to lead the band of survivors out of the tunnel before the structure collapses.