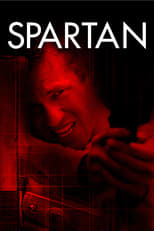 Release: Mar. 12th, 2004
Runtime: 1 hour, 42 minutes
U.S. government agent Scott is assigned to rescue the daughter of a high-ranking government official. As willing as he is to bend the rules to get things done, though, Scott is shocked to find that others are willing to go even further to protect a political career.

TheUsualSuspect Kiss Kiss Bang Bang was brilliant and I believe that a film like Spartan, might actually help do the trick.
READ REVIEW