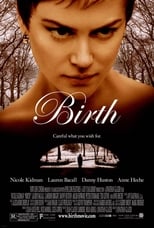 Release: Oct. 29th, 2004
Runtime: 1 hour, 40 minutes
It took Anna 10 years to recover from the death of her husband, Sean, but now she's on the verge of marrying her boyfriend, Joseph, and finally moving on. However, on the night of her engagement party, a young boy named Sean turns up, saying he is her dead husband reincarnated. At first she ignores the child, but his knowledge of her former husband's life is uncanny, leading her to believe that he might be telling the truth.

2 Birth of a Nation - Birth of a Messiah?
I was reluctant to see this film. The trailer did not convince me that it was something I wanted or needed to see. Fox Searchlight’s unprecedented investment piqued my curiosity, but not enough to...

Gideon58 The film stars Nicole Kidman as Anna, a sophisticated widow who is about get remarried to Joseph (Danny Huston) when a young boy (Cameron Bright) shows up at her engagement party and claims he is Sean, Anna's husband, who died 10 years ago after collapsing in Central Park while jogging.
READ REVIEW

thracian dawg Joseph and Anna go downstairs to confront Sean and warn him to end his silly game; before entering the elevator, she glances back, catching Sean collapsing in the hallway.
READ REVIEW