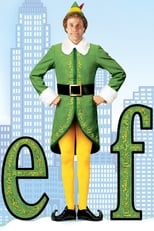 Release: Oct. 9th, 2003
Runtime: 1 hour, 37 minutes
When young Buddy falls into Santa's gift sack on Christmas Eve, he's transported back to the North Pole and raised as a toy-making elf by Santa's helpers. But as he grows into adulthood, he can't shake the nagging feeling that he doesn't belong. Buddy vows to visit Manhattan and find his real dad, a workaholic publisher.

Gideon58 Buddy's father, Walter (the late James Caan) is a workaholic publisher so obsessed with his work that he is ready to ignore his wife (Oscar winner Mary Steenburgen) and son, Michael as usual, until Buddy runs smack into his life and refuses to take no for an answer when he innocently demands a relat....
READ REVIEW

The Rodent Raised as an Elf, buddy is slow compared to real Elves and struggles with life but never gives up and has the spirit and tenacity of the Elf way.
READ REVIEW

Yoda Elf is the story of a man (Buddy) who, as a baby, crawls into Santa's sack, and is, of course, subsequently raised by elves.
READ REVIEW