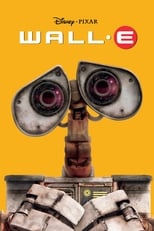 Release: Jun. 22nd, 2008
Runtime: 1 hour, 38 minutes
WALL·E is the last robot left on an Earth that has been overrun with garbage and all humans have fled to outer space. For 700 years he has continued to try and clean up the mess, but has developed some rather interesting human-like qualities. When a ship arrives with a sleek new type of robot, WALL·E thinks he's finally found a friend and stows away on the ship when it leaves.

Citizen Rules I also loved...the way the first scenes on Earth played out like an old Charlie Chaplin film with WALL-E as the little tramp exploring his world in a Chaplinesque type of way.
READ REVIEW

JayDee And while I understand some people may find the film just a tad hypocritical with its messages, considering the amount of merchandising the film spawned (consumerism) and that Pixar films have become the ideal babysitters for numerous parents (the abundance of technology in our lives), it's not some....
READ REVIEW

mark f I thought the film's overriding message was one of humanity, and if it takes some non-human "creatures" to help us rediscover our lost humanity, that's OK with me.
READ REVIEW
View All (15)