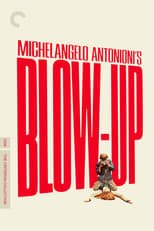 Release: Dec. 18th, 1966
Runtime: 1 hour, 51 minutes
A successful mod photographer in London whose world is bounded by fashion, pop music, marijuana, and easy sex, feels his life is boring and despairing. But in the course of a single day he unknowingly captures a death on film.

We didn't find any linked discussions for this film. Here are the results of a quick search of possibly related threads:
19 Blow Up
Blow up (1966) - Michelangelo Antonioni I stepped into my first viewing of this film with a sort of a childish eagerness. After all, this is a film that, time and time again, has been referred to a...
8 What do you think of Blow Up (1966)?
It's a hard movie for me to judge cause I read the premise online which it said was about a photographer who thinks he may have photographed a murder, and that is what the DVD cover describes as well....
0 Blow Up 1967 (revisited)
Now here is a real cult movie directed and produced by Michangleo??????. The movie received two oscar nominations, but I found it rather slow and a bit boring. The story centers around a super rich ph...
142 Who is the last actor to blow you away with their performance?
It could be from a new film that you watched for the first time or a rewatching of one of your favorites , or maybe just a film you caught on tv and were taken with a specific performance. he...
20 Blow Your Mind - Movie Theories
Post here your theories about movies, that you think some, or many, people haven’t noticed. As an example, I was just sitting watching the Jurassic Park foursome, and I got onto JP3… … and I just...