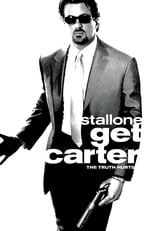 Release: Oct. 6th, 2000
Runtime: 1 hour, 42 minutes
Remake of the British classic. Jack Carter, a mob enforcer living in Las Vegas, travels back to his hometown of Seattle for his brother's funeral. During this visit, Carter realizes that the death of his brother was not accidental, but a murder. With this knowledge, Carter sets out to kill all those responsible.

We didn't find any linked discussions for this film. Here are the results of a quick search of possibly related threads:
6 Get Carter
Have you guys seen the ads for this? Looks interesting. I'm game to see it, though it does look like a cross between Payback and that other movie Stallone did, where he was sherriff ... That whole wa...
6 Coach Carter
i just got back from seeing this and i have to say it was alot better than i expected. i am not going to write a full review im just going to say what i liked. when i first found out it was going to b...
5 john carter
Im looking for a movie with this actor i think, from John Carter a movie where he, in desert, teleport verry fast and cut 3 cars. Thx...
24 John Carter
Pulling in $30 million is pretty good, except when your film cost around $250 million and it's Disney and it's suppose to be the big huge blockbuster. It didn't beat last weeks #1, The Lorax, which...
23 John Carter of Mars (2012)
I didn't see another thread on this one. I have high hopes for it, as a fan of the original books. Director Andrew Stanton and Disney attempt to do for Edgar Rice Burroughs' John Carter of Mars s...