How to Train Your Dragon 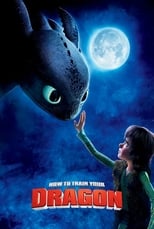 Release: Mar. 10th, 2010
Runtime: 1 hour, 38 minutes
As the son of a Viking leader on the cusp of manhood, shy Hiccup Horrendous Haddock III faces a rite of passage: he must kill a dragon to prove his warrior mettle. But after downing a feared dragon, he realizes that he no longer wants to destroy it, and instead befriends the beast – which he names Toothless – much to the chagrin of his warrior father

Iroquois I know I shouldn't expect anything too complex from a family film like this one, but this narrative in particular has been in a lot of the major animated films recently and it's distracting how, for all the visual flair and whatnot on display, DreamWorks and even Pixar have been reusing it without m....
READ REVIEW

Tramuzgan How to Train Your Dragon is often considered the best Dreamworks movie, and while I'd still argue Megamind is better, this one is a close second.
READ REVIEW

ahwell It makes How to Train Your Dragon easily the best Dreamworks animated film.
READ REVIEW
View All (5)