No, Starship Troopers Is Not Brilliant Satire

Take, for example, the case of Starship Troopers, a 1997 film based on a 1958 sci-fi novel by Robert Heinlein. On the surface, both the film and the book are about a giant bug space war, which is about as over-the-top as you'd expect based on that description. The film was largely dismissed by critics and moviegoers as technically impressive and fun, but ultimately shallow. Not that this mattered to scads and scads of teenage boys (I was one of them) who thought the film was incredibly cool when it came out. Because, you know: giant bug space war. As a 13-year-old my lone critique of the film was its profound lack of ninjas.

All those teenage boys are young men now, and most of us find ourselves enamored with this medium that loves few things more than adolescent nostalgia and analyzing the living daylights out of seemingly superficial things. Starship Troopers stands at the nexus of these two things, so it shouldn't be too surprising that it's the target of a pop culture rehabilitation.

Case in point: a prominent semi-recent defense from Calum Marsh in The Atlantic. I quote:

"Starship Troopers is satire, a ruthlessly funny and keenly self-aware send up of right-wing militarism. The fact that it was and continues to be taken at face value speaks to the very vapidity the movie skewers."

Just two weeks prior, Jacob Hall of Movies.com made an even bolder claim: that "Starship Troopers is one of the best movies ever made."

Based on the timing, it seems likely that both writers were compelled to defend the film from RiffTrax, the modern incarnation of Mystery Science Theater 3000. These days they're selling MP3 commentaries you play alongside the movies you rent or own, and occasionally they do live shows. Shortly before both essays they riffed Starship Troopers and simulcast the event around the country. Both authors specifically mention the event. Here's Marsh:

"The tagline for RiffTrax is “Your favorite movies—made funny!” What they don't seem to understand is that Starship Troopers already is funny—and smart."

"Sorry, you ironic doofuses who make a living talking over bad movies. Starship Troopers knows exactly what it is and is already 10 steps ahead of you by the time you make your first wisecrack."

There's a big problem with this dismissal: the RiffTrax writers specifically reference the film's attempts at satire. Repeatedly. Enough to make me wonder if either author was actually at the event, because there was nothing whatsoever in it to suggest they don't understand the film's aims. Far from being ten steps behind the debate, they're actually one step ahead: they already know it's satire and they're already onto whether or not it's good satire.

And that, I think, is where the defense of the film breaks down: it mostly consists of simply pointing out that it has satirical ambitions, and then assumes that the number of people who don't realize this must be evidence of its brilliance. But the quality of satire is not measured by the number of people who don't get it. There are two reasons satire can fail to land: because it's way too smart, or because it's too simplistic. It can go under people's heads.

“The quality of satire is not measured by the number of people who don't get it.”

What kind of satire might go under people's heads? The kind that adds very little to the thing it's satirizing. Starship Troopers does not so much skewer militarism as it depicts it and adds the occasional raised eyebrow. This is satire in the same way repeating what someone says in an intentionally dumb-sounding voice is an impersonation. Real, penetrating satire sneaks up on you and causes you consider things from a new angle. It involves a good deal more than simply showing the thing and winking. Especially if you're winking the whole time—an action which stops you from perceiving depth, literally and metaphorically.

This sort of thing exists in other mediums, as well. You can buy a book called The Art of Kissing that consists of nothing but hilariously misguided pamphlets from the 1930s. Someone gave me a copy as a stocking stuffer once, which I think is the right way to treat a purely ironic exercise: they're amusing, but not brilliant. 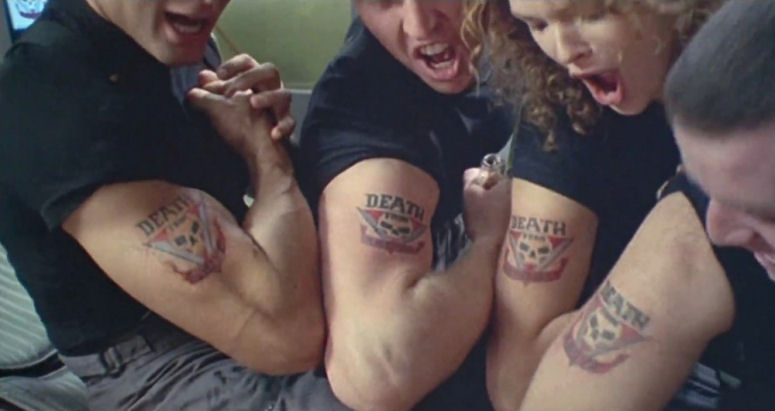 An apparently incisive commentary on militarism

One of the problems with focusing so much on intent is that it can be used to explain away anything. By praising the film's clumsiness as part of its brilliance, there's literally no way to distinguish actual flaws from deliberate ones. This makes the praise unfalsifiable, and it explains the polarization of opinions: if you buy into its brilliance up front, you can jujitsu every flaw into a strength. Bad acting? Deliberate! Stilted writing? Part of the farce! Continuity error? Drawing attention to the artifice of media! And so on. Even if this were a valid defense, how would you ever know?

This isn't the first time someone's tried to use satire as a shield. In a comparison the fans of Troopers will probably resent, Tommy Wiseau has somewhat infamously tried to pass his cult bomb The Room off as a "black comedy," albeit well after he saw how badly it had failed as a serious drama. Uwe Boll's tried to pull the same trick. In extreme cases, people use the concept of satire to excuse things that are virtually indistinguishable from the offensive things they're supposed to be satirizing. But if you can't tell the difference without being told there is one...is it actually there? If someone makes a satire that almost everybody takes seriously, is it a brilliant success, or a miserable failure?

The answer to that depends at least partially on what you think the aim of satire is. Generally, the word refers to the exposure of folly through irony. But to many of this film's defenders, it seems to have mutated into a synonym for "sarcasm." If the goal were to expose the folly of militarism, then the sheer number of people who didn't "get it" would seem to suggest that it didn't do a very good job. If the satire doesn't land, then it hasn't necessarily outsmarted its audience: it's just as likely outsmarted itself. 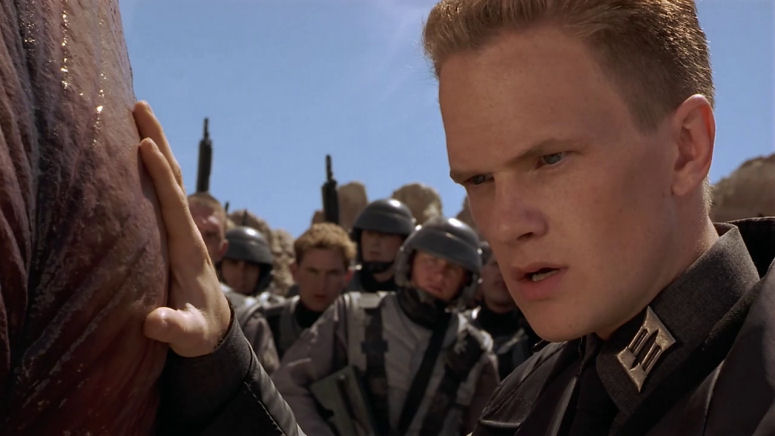 "Personally I find the idea of a Paul Verhoeven film that thinks o-ffensive."

There's more than a little retrofitting here, too. If this film were made by someone with a long, unquestioned history of high-level filmmaking, that might be one thing. That it was done by someone who has a long, unquestioned history of making modern exploitation films speaks volumes. Director Paul Verhoeven is a wizard of the baser cinematic arts.

Which is not to say I'm not sort of a fan, anyway. I treasure my copy of Deep Blue Sea, but I don't think it's a meta commentary on genetic modification. I don't think it's even a parody of Jaws. But if there's any satire there, it's completely drowned out by what's going on above the surface. The same is presumably true of Showgirls, though, whaddya' know, you can find knowledgeable people willing to defend that one, too. Maybe Verhoeven is a satirical genius, or maybe he only knows how to make films one way, and has found it profitable to throw in a couple of winks to convince people they're in on some big joke.

This post-hoc justification seems to apply to the film's defenders, too. The ones I know are smart, thoughtful people who take cinema seriously, and I have every reason to believe Marsh and Hall are the same. Hall's namesake and colleague at Movies.com, Peter Hall, was one of the original members of this site, and I know he adores the film. I also know that, while he certainly has taste, he'd be the first to tell you that he has a soft spot for SyFy schlock. He'd watch—and love—Starship Troopers even if it had no satirical ambitions at all. At a certain point, that thing you started doing or saying ironically becomes something you like unironically.

So which way does the causality flow? Is a genuine appreciation for the way the cheesy stuff reinforces the satire, or is the film's value that it gives the cheesy stuff a satirical veneer that makes it less gauche to enjoy? Does the patina of social commentary take the "guilty" out of "guilty pleasure"?

I'm sure the film's defenders will volley back a list of things the film adds to the source material: propaganda framing devices, the (apparently novel?) juxtaposition of sports and war, ferrets running up people's dresses, and other deep meditations on warfare. But when we begin to enumerate these things, I think the reality comes into focus: Starship Troopers is called a satire because it calls itself one. And I can relate to the instinct to admire it, because it's hard to compete with the epiphany of seeing something you enjoyed as a child in a completely new light when you grow up, but that's really just nostalgia by another name. Come for the giant bug war, stay for the retroactive irony.

Gangland
I don't know how I'm just stumbling across this thread and Yoda's essay, which I thoroughly enjoyed. I agree that it may not be masterful satire, it's waaay on the nose with the propoganda, but... Read Comment

ironpony
Well I just watched it again to refresh myself on it and my opinion is that I still didn't like it. I feel that the cliches actually get in the way of the movie, and even if they are meant to be inte... Read Comment